Frequently hailed as a way to reduce polarization, ranked-choice voting is, in fact, a dangerously complex process that threatens to distort election outcomes

Anyone concerned about voter participation and the integrity of our election systems should be particularly worried about ranked-choice voting, currently under consideration here in Massachusetts.

Frequently hailed as a way to give voters more choice and reduce polarization, ranked-choice voting is, in fact, a complex and confusing process that threatens to reduce voter participation and distort election outcomes.

Under this system, voters list candidates in order of preference, rather than simply vote for one person. If nobody receives a majority of first place rankings, election officials eliminate the candidate with the least votes and redistribute those votes to the second choices on those ballots until they create a faux majority for one of the remaining candidates. 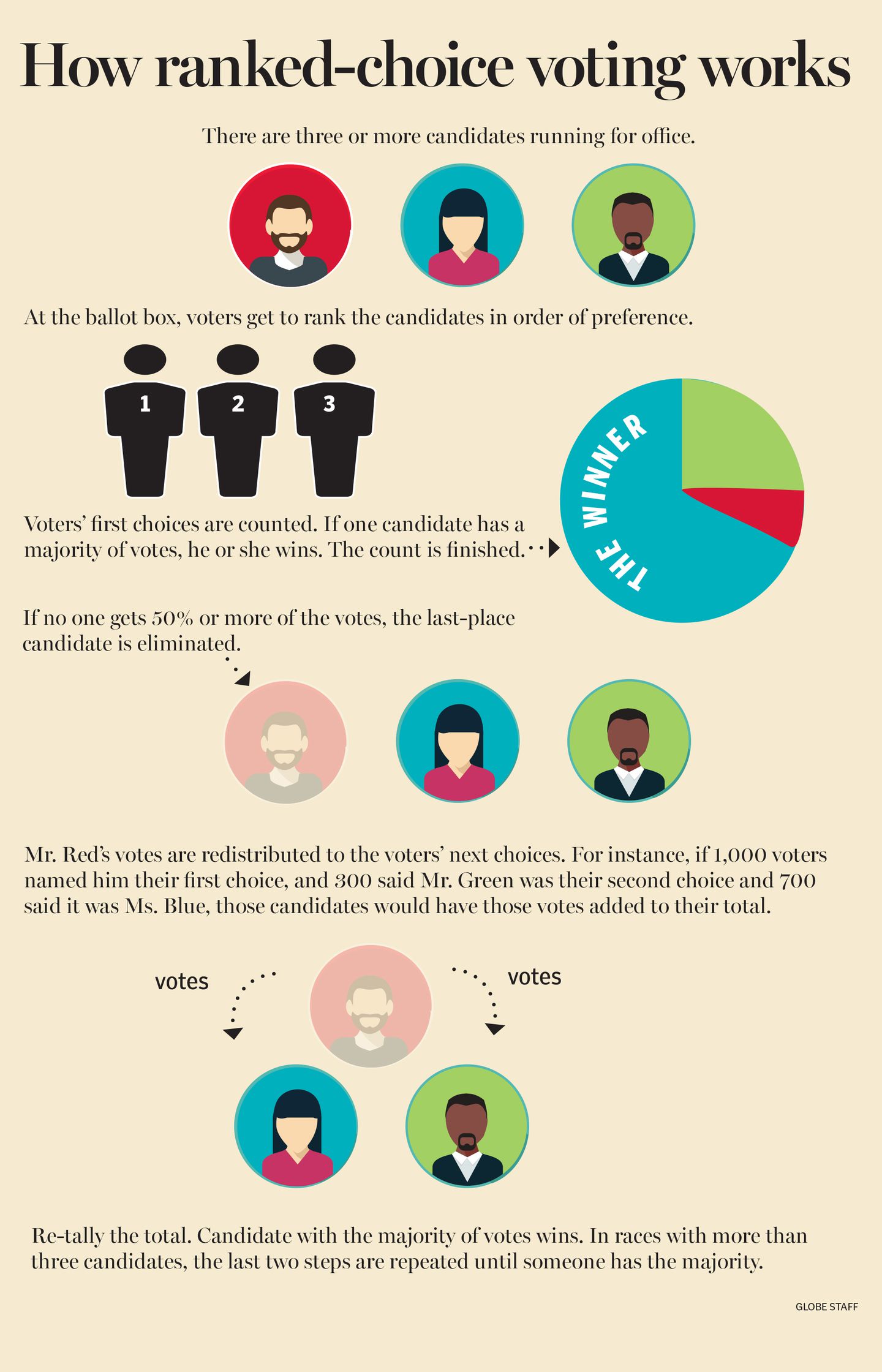 Let’s say that in the Massachusetts Democratic presidential primary, 40 percent of voters rank Senator Elizabeth Warren of Massachusetts their first choice, 20 percent rank former vice president Joe Biden first, 15 percent Senator Bernie Sanders of Vermont first, and the remaining 25 percent rank someone else as their first choice. Although Warren receives vastly more votes than any other candidate, state election officials would eliminate the last-place finisher, let’s call him Tom Steyer, and redistribute those votes to candidates that Steyer supporters ranked second. The officials repeat this process with the next lowest vote-getter, until one candidate has a majority of remaining ballots.

It’s not hard to imagine the mischief that might occur as bureaucrats redistribute votes in what are, essentially, a series of closed-door run-offs. But even assuming the redistribution occurs uncorrupted, the process can lead to distorted outcomes.

If Sanders receives a large number of second, third, fourth, and fifth place rankings from voters who chose candidates that finished at the bottom, Sanders might, through the redistribution process, end up with more votes than Biden.

In this scenario, third-place Sanders would eliminate second-place Biden from the race, requiring that Biden’s votes be redistributed to Sanders and Warren. If enough Biden voters prefer Sanders to Warren, Sanders could win the primary — even though 85 percent of the voters chose somebody else, and even though Sanders might not have been even the second or third-place choice of a majority of voters.

This hardly seems fair to Biden voters who might have ranked candidates differently had they known that selecting Sanders as even a third or fourth choice would ultimately undermine their preferred candidate.

Of course, voting shouldn’t require a degree in game theory. And our election system shouldn’t penalize voters who deliberately choose not to rank candidates they strongly dislike. But that is exactly what ranked-choice voting does, as voters who rank only some of the candidates can have their ballots “exhausted” and, thus, discarded if their choices are eliminated early on.

In practice, this means that a candidate can win an election with a majority of redistributed votes, even if the total number of votes he receives is less than the number of discarded ballots. This is exactly what happened in a 2010 election for a seat on the San Francisco Board of Supervisors. After multiple rounds of counting, a winner was declared with a faux majority of 4,321 votes — but, by that time, 9,608 ballots had been discarded due to “exhaustion.”

Because of the potential for confusion and for disqualification or exhaustion of ballots, in 2016, California’s Democratic Governor Jerry Brown vetoed ranked-choice voting legislation. “In a time when we want to encourage more voter participation,” Brown said, “we need to keep voting simple.” California’s current Democratic governor, Gavin Newsom, likewise vetoed a ranked-choice voting measure on similar grounds.

Even Sanders’ hometown of Burlington, Vermont, abandoned the practice after a mayoral candidate with the most first-place votes lost the election in 2009.

More recently, Maine’s newly adopted ranked-choice voting system yielded a similarly unexpected outcome. In the 2018 congressional midterm election (the first federal general election in the nation to use this system), Republican Representative Bruce Poliquin received more votes than any other candidate in a four-way contest. Yet, the Maine secretary of state declared Democrat Jared Golden the winner after discarding 14,076 “exhausted” ballots that did not rank all four of the candidates. Significantly, in a survey of eligible voters who did not participate in that election, 26 percent said they stayed home because of confusion over the ranking system.

No voting system is perfect. But, at a time when anxiety about our election system runs high, Massachusetts voters should be leery of complicated bureaucratic schemes that can reduce voter participation, increase opportunities for corruption, and lead to unforeseen, difficult-to-explain results.

Jennifer C. Braceras is director of Independent Women’s Law Center and sits on the board of Massachusetts Fiscal Alliance, which opposes ranked-choice voting.